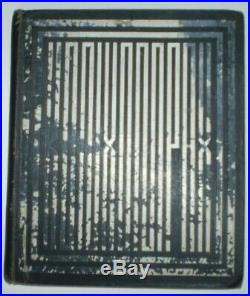 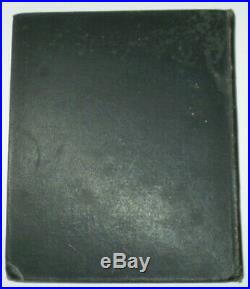 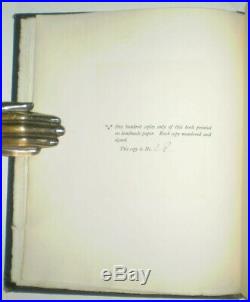 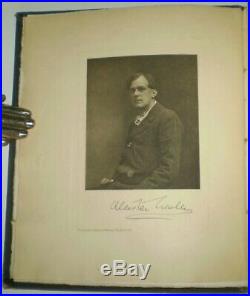 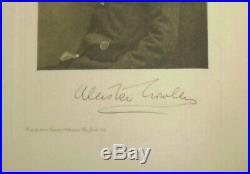 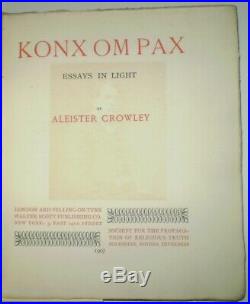 Konx Om Pax, Essays in Light. Walter Scott Publishing Co. First Edition, Second Issue. Signed by Aleister Crowley under the frontispiece portrait of him in black ink. The limitation page states Five hundred copies only of the book printed on handmade paper. Each copy numbered and signed. This copy is No. Most copies of this work were neither numbered or signed. Only 11 copies of the first issue were printed. This second issue consists of only the first 100 copies of the First Edition, they were bound in black buckram with white lettering. The third issue consists of 400 copies of the First Edition and they were bound in white buckram with gilt lettering. Square octavo, xix, 108, [2], [10], original black buckram lettered in white. The design on the front was created by Aleister Crowley while he was smoking hashish and symbolizes the light coming out of the darkness. The frontispiece is a portrait of Aleister Crowley that was taken by Aime Dupont. The title page is printed in red and black. Although the limitation page states this was printed on hand-made paper, this issue was actually printed on machine-made paper, printed cross-grain. There is some offsetting to the title page, endpapers foxed, and some occasional foxing throughout, the letters on the front are slightly worn off, some rubbing, else in very good condition. If you have any questions feel free to ask and don’t forget to check out my other listings. The item “SIGNED & NUMBERED, 1907, First Edition, KONX OM PAX, by ALEISTER CROWLEY, OCCULT” is in sale since Thursday, January 16, 2020. This item is in the category “Books\Antiquarian & Collectible”. The seller is “dirkdensity” and is located in West Chester, Pennsylvania. This item can be shipped worldwide.